Who on the Earth would say, they don’t need quick cuts during construction. Yeah!!

No one, when it comes to quick cuts of various materials like wood, plastic or metal with a high degree of precision or accuracy, no one else than a reciprocating saw is the right tool.

In this article, we have got you covered all the promising features of the best DEWALT DWE305 reciprocating saw.

We have researched a lot to provide you with genuine information like reviews, benefits and downsides to tell you whether it’s worth buying or not. Have a look at this amazing tool. 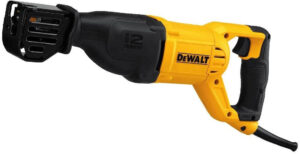 The DEWALT reciprocating saw DWE305 gives you the liberty of adjusting your speed. As it is equipped with the variable speed trigger.

Now, you are your boss to modify the speed according to the difficulty or the ease of your task. For instance, a lower speed is required while handling a light task like cutting cardboards or slicing the tree branches.

Releasing the trigger slightly allows you to lower the speed. Note;  The user manual warns you not to use the saw at a lower speed regularly, as it might damage  your

The best budget DEWALT DWE reciprocating saw under $130 gives you the 12 amp motor. The powerful engine is made to produce a maximum speed of 2900 stroke per minute.

This speed is enough for handling any construction-related task within few minutes. We are very pleased to announce this saw as all one tool. For any construction, demolition, DIY project or plumbing work.

Who can imagine precise cuts of wood and thin slices of steel without a comfortable grip ?? No one Therefore, the DEWALT DWE 305 Corded saw has a rubberized comfort grip.

A strong grip is what guarantees you safety and productivity. The ergonomic design allows you to work for long hours without any discomfort or pain while working.

You can change the blade without any hassle. The straightforward blade installation process is so simple. A user only needs to pull the clamp to release the lever up and to insert the blade shank into the clamp.

when the blade shank is in it, you simply release the lever. The blade clamp is made to support four-blade positions.

This feature saves you from the repeated efforts of cutting. The sharp blades save both your energy and time.

The DEWALT DWE305 is an advanced reciprocating corded saw. We admire the professional look and the long-lasting body.

The DWE305 is the only saw that uses a blade lock system. This amazing system lets you install the blade in four different positions.

The feature of cutting left and right without twisting the saw to different positions keeps your hands in a natural position.

The main handle has a hand-fitting curve, that allows you to work the long hours. The DEWALT DWE305 has a unique fixed shoe on the front.

It has a lever-action blade release. The powerful motor and the keyless, lever-action is something worth investing in. The variable speed allows the user to change the speed as per the requirement of the material.

What do you get in the package?

So, this particular saw is ready for use straight out from the box. It is not available with the carry case, which is sadly a minor disappointment.